NASA astronaut Charlie Camarda chats with Science & the City about his experiences in space and the future of the U.S. space program.

Astronaut Charlie Camarda was a mission specialist on NASA's 2005 STS-114 Discovery flight, the Return to Flight Mission. He is now senior advisor for innovation to the Office of Chief Engineer, Johnson Space Center. Camarda recently visited the New York Academy of Sciences to address more than 100 K-12 students. He also discussed his experiences in space with Science & the City's Newsletter Editor Tamara Johnson. An excerpt of the interview follows.

CC: It's such an exciting ride! To tell you the truth, when we took off, it was so hyped up that I had actually expected there to be a lot more vibration and sound than there was. Whether it was the weather or I just had a really good flight, it was actually very smooth. You're prepared for it. We were the Return to Flight Mission after the Columbia accident, so we had lots of work to do. We had lots of supplies to bring and lots of new technology to put in place and evaluate to make sure the rest of the crews would be safe. We were very busy, and that's how typical flights are. Most of your time is tightly budgeted and controlled by the ground.

S&C: What did it mean to be the first crew to fly following the Columbia tragedy?

CC: It was harder on our families. I grew up as a research engineer at NASA Langley Research Center, and my particular area of expertise was very close to what caused the accident. I worked on high temperature structures, heat transfer, and leading edges, so I was very aware of the dangers of things striking the thermal protection system and how fragile the thermal protection system was. As far as being worried as to whether or not we were ready to fly, though, I was very confident we were. I felt very safe. The emotional significance of flying after three of my classmates and seven very close friends had passed away—that was a little tough. It takes a while to come to grips with that.

S&C: What were the aims of your mission?

CC: We had several priorities. We were testing the new technology we'd developed to make sure that each successive mission (and our mission!) would be safe: how to inspect the vehicle and send the data down to Earth; how to make sure what we thought we were seeing was correct; and collaborating and coordinating to make sure the data aligned with our predictions. We developed a lot of inspection technology and also repair technology. We wanted to be sure, if we did get hit, astronauts could go outside and repair the vehicle. We did the first repair on orbit I believe.

S&C: How do you deal with anomalies in space? 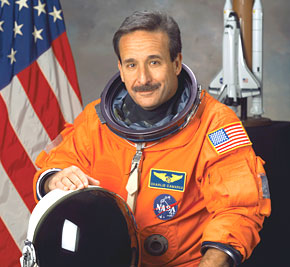 CC: One of the new procedures we did was what's called an R-bar pitch maneuver. When we're on the radius vector directly underneath the space station, about 600 feet below the station, the entire shuttle does a back flip. ISS Expedition 11 commander Sergei Krikalev and flight engineer John Phillips photographed the shuttle's belly from Space Station to see if there was any damage. You have shuttle tiles, about 30,000 of them, with a black coating. If you get hit, it's real easy to see because beneath the black tiles there are white silica materials.

As we were doing the back flip, they saw a small piece of what's called the gap filler. It's Nomex material, about the size of a very thin felt pad, about six pieces of paper. Two pieces of Nomex came out and were sticking out about an inch. So we had to inspect it and understand what it would mean. When we sent the image of the material down to the ground, the experts in aerothermodynamics said we had to go out and pull [the loose pieces] out of there. If we didn't, they would trip the boundary layer, the layer of air that hugs the surface, and shed these vortices in a wedge type angle. Those vortices would hit the wing leading edge and burn us up. Can you imagine? You just had these very small pieces of material sticking out.

S&C: How do you train to manage life or death situations?

CC: We fly in the back of a T38 and we learn what's called crew resource management. It's what pilots, navigators, and crew do on aircraft, so when they see emergencies, they know exactly what their jobs are. There's an economy of words, a scripted procedure that each person has to follow. You know exactly what you have to do. We train like that as a team, doing navigation, flying the vehicle, talking to the ground, trying to make sense of what's going on around you in all kinds of conditions. It gets you ready.

S&C: What do you think of the future of space science?

CC: Well, I think we've started to lose our edge, to be honest, but all the commercial and private endeavors are great. The competition sparks innovation, and that's what we need. NASA should be supporting these projects and working on basic research. Should we go to Mars? Definitely! Start working on asteroids? Yes! The more people we have up there and the more ideas and challenges we think about, the more inspired people will be to come up with even more ideas and solutions, students and NASA scientists alike. It used to be that only test pilots could go up, but now it's getting more popular. It's still really expensive, but I hope soon it will be a more accessible experience. With a more diverse group of minds inspired to think and dream about space, we'll start to see really great stuff happen.