Bred to Be Wild 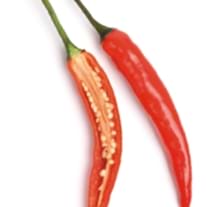 Researchers are improving crop traits by conserving their undomesticated relatives.

In the 1960s, some wild beans were collected from the sides of roads and other patches of wild land in Mexico and stored in aluminum pouches in freezers at one of the seed banks maintained by the United States Department of Agriculture (USDA), in Pullman, Wash. There they stayed for the next four decades until 2012 when Paul Gepts, Ph.D., a professor of plant sciences who had just taken over the grain legume breeding program at the University of California, Davis, exhumed them.

Gepts reasoned that the archival beans, originating from plants growing in dry regions, might be more drought tolerant than their domestic cousins, an important trait considering that most of the farmed beans in the world face drought stress. After growing the seedlings in a greenhouse in the dead of winter to simulate the long nights where the plants grow in Mexico — and crossing the wild plants with domestic varieties — Gepts and his colleagues hit upon a new line that thrived and produced high levels of seed even under the stingiest of irrigation conditions.

It’s just one example of the desirable traits that food crops we depend on can derive from the wild relatives they descended from. But much depends on collecting and properly preserving those wild relatives in one of the nearly 2,000 seed banks around the world. “I call it insurance. You don’t know when you are going to need [a crop wild relative], but once you have it you are pretty glad,” says Gepts.

In another example, during the 1980’s, scientists at CIAT, a research organization in Colombia that also maintains a seed bank, realized that wild beans collected from a different part of Mexico in the 1960s, harbored resistance to weevils, a serious pest that can decimate dried bean seeds. “When you put these kinds of stories together … it paints a picture of diversity that is still present in the wild types, but that has been left behind in the domesticated types,” Gepts says.

Farmers have been selecting plants for qualities such as high crop yield for thousands of years. Exactly what kind of diversity a wild relative has is impossible to know until researchers working with the seed banks start growing it, and examining such traits as crop yield, drought resistance or taste. Increasingly in recent decades, researchers have also been studying the seeds using single nucleotide polymorphism (SNP) analysis.

To bring more diversity into those seed banks, the USDA and governments of many countries with high agricultural production, as well as international groups, fund trips to collect crop wild relatives, often targeting parts of the world that have not been well explored. In many cases, they are racing to get there before plant habitat is lost to development and climate change related threats.

Although collection trips have been widespread since the 1960s, researchers have typically focused on locating wild ancestors and taking a few individual specimens from accessible areas — hence the popularity of roadside collections. In the early 1990s, Gepts participated in a USDA-sponsored trip to collect wild beans in Bolivia, but the team was forced to leave some terrain un-sampled because it was too difficult to traverse. “In many parts of the world, researchers need to return to the same locations repeatedly to do more thorough collections of plant tissue as well as study the impact of local environments upon the plants,” said Gepts.

Paul Gepts, Ph.D., in the greenhouse at UC Davis.

Photo: The Lexicon and the Global Crop Diversity Trust

Researchers have put some rough numbers on how well crop wild relatives are represented in seed banks, and generally they support the assertion that we need to collect more. Out of the approximately 1,000 taxa, or broad categories, of wild ancestors in the world, an estimated 30 percent of relatives of a total of 63 crops cannot be found in any of the plant repositories; another 24 percent are only represented by samples from fewer than 10 different populations.

An unexpected silver lining of the research, however, is the finding that crop wild relatives might be a bit better conserved in nature than in seed banks because much of their habitat is within national parks and other protected areas. “[But] a plant being in a protected area does not actually mean that a particular type of plant is all that protected. [Unless these plants are managed], people not paying attention to them, might think they are weeds [and] try to eradicate them,” says Colin Khoury, Ph.D., who studies crop diversity for CIAT, (International Center for Tropical Agriculture) part of an international agriculture research network called CGIAR, (Consultative Group for International Agricultural Research).

Khoury was involved in studies estimating conservation of crop ancestors. Along with stepping up efforts to collect and store plant materials in seed banks, Khoury says that we need active management programs to ensure conservation of crop wild relatives in protected areas.

Another source of crop diversity is the crops themselves, both the commonly farmed varieties that acquire mutations as they grow and the so-called landraces, or ancestral varieties of domesticated crops that some farmers still cultivate. Unlike their wild relatives, many of these varieties have been stored in seed banks by researchers and farmers, as their importance for breeding crops with new traits has long been recognized, whereas the traits that wild relatives can lend crops is comparatively unchartered territory.

Although it might seem reasonable that farmers could handle conservation of these crops just by growing them in the field season after season, seed banks play an important role because there are “fewer farmers growing a smaller number of plants,” says Denise Costich, Ph.D., a senior scientist and head of the maize collection at the germplasm bank, which archives seeds and other plant tissue, at International Maize and Wheat Improvement Center (CIMMYT), a Mexico-based CGIAR center.

Research by Costich and her colleagues found that many farmers in Morelos, a state in central Mexico, stopped cultivating landrace varieties of corn over the last half century in favor of hybrid varieties, which are less genetically diverse but often produce higher yield and have other economically advantageous traits. In addition to conserving germplasm, CIMMYT and the other CGIAR seed banks, as well as certain government-operated seed banks including the USDA system, share plant materials internationally with academic researchers and private companies working to breed varieties with new traits.

As important as it is to collect germplasm from crops and their wild relatives and maintain them in seed banks, it is only half the story. It is critical to grow these seeds in experimental field stations and characterize them so researchers know which ones have desirable traits and have them at the ready to breed with crops, in case of an emergency such as southern corn leaf blight, which wiped out much of the U.S. corn in 1970, says Seth Murray, Ph.D., professor of soil and crop sciences at Texas A&M University. “Otherwise it’s just like having a library where nobody is reading the books,” he says. These efforts are happening to some extent. For instance, Costich’s team at CIMMYT has characterized most of the corn samples they have added to the germplasm bank vault in the last decade. The USDA does some characterization, but “given the value of agriculture and crop diversity, there is definitely not enough money spent on that,” Murray says.

The work of trying to breed new varieties can quickly grow to an unmanageable scale. In his applied breeding program, Murray crosses U.S. corn varieties with crops that were collected in Mexico and South America, but then has to test their progeny in many different field conditions over several years to understand how they behave under different environments before they are ready for farmers. In research that earned him the recognition of Finalist for the 2019 Blavatnik National Awards for Young Scientists, Murray and his collaborators have been using drones to photograph plants as they grow, and developing computer algorithms to analyze the images to make predictions about the crop’s yield and other properties. According to Gepts, who has also turned to drone surveillance to monitor bean plant traits, it is not enough to have an ever-expanding font of crop genetic diversity to scour for new traits. “The other trend is making breeding more efficient whether it is through the use of drones or different ways of phenotyping progenies,” he says.

Denise Costich, Ph.D., in the CIMMYT vault where they store the corn seeds.

Seth Murray, Ph.D., harvests new inbred lines of maize with his undergraduate and graduate student researchers. These inbred lines have been selected directly from corn varieties from South and Central America (tropical varieties) and from crosses with germplasm from elite varieties from the Midwestern U.S. (temperate varieties).