Dr. Michal Rivlin is a neuroscientist who has made the paradigm-shifting discovery that cells in the adult retina can exhibit plasticity in their selectivity and computations. One of the first demonstrations of neuronal plasticity outside the brain, this raises fundamental questions about how we see, and has implications for our understanding of the mechanisms underlying computations in neuronal circuits, the treatment of retinal diseases, blindness and development of computer vision technologies.

Dr. Moran Bercovici is an analytical chemist who studies microscale processes coupling fluid mechanics, electric fields, heat transfer and chemical reactions. His studies have potential implications in multiple fields, ranging from the detection of low concentrations of biomolecules for rapid and early disease diagnostics, to the creation of new microscale 3D printing technologies.

Dr. Erez Berg is a theoretical condensed matter physicist who develops novel theoretical and computational tools to study long-standing and emerging questions in quantum materials. His research has provided important insights into the physics principles behind a wide variety of exotic phenomena in quantum materials, which will help to speed up the implementation of these materials in next generation electronics including quantum computing, magnetic resonance imaging and superconducting power lines.

Experimental particle physicist, Prof. Konstantinos Nikolopoulos led a 100-physicist subgroup in ATLAS, a large scientific collaboration at CERN, which made key contributions to the discovery of the Higgs boson. This discovery, jointly announced by the ATLAS and CMS collaborations at CERN, is regarded as one of the biggest breakthroughs in fundamental physics this century. This discovery completed the experimental verification of the Standard Model of particle physics, the mathematical theory through which we understand nature at the fundamental level, and resulted in the Nobel Prize in Physics being awarded to the physicists who predicted the Higgs boson decades ago. Prof. Nikolopoulos’ work has significantly improved our understanding of the Higgs boson and explored potential new physics beyond the Standard Model.

Prof. Gustav Holzegel is a mathematician, who develops rigorous mathematical proofs of physics questions related to Einstein’s general theory of relativity. He provided the first proof of a decades-old conjecture about the stability of black holes in the case of the simplest form of black holes in the universe, and has made significant progress towards completely proving this conjecture in the cases of more complicated types of black holes. The techniques he developed have also influenced the studies on other open fundamental questions in theoretical physics and astrophysics.

Prof. Máire O’Neill is an electrical engineer working in the area of cybersecurity. She has proposed novel attack-resilient computer hardware platforms and chip designs that have found immediate applications. Her solutions are orders of magnitude faster than prior security implementations while also being cost effective. Her achievements have already generated an enormous impact on society, which will continue to increase as cyberattacks costing the global economy hundreds of billions of dollars annually, continue to grow at an unprecedented scale.

Prof. Kukura is a physical chemist who is developing cutting-edge optical methodologies for the visualisation and analysis of molecules such as proteins that exist within the body. To accomplish this task, he takes advantage of the scattering of visible light, which is the universal process through which we see the world around us. On the macro-scale, this scattered light provides information on the size and shape of an object. What Prof. Kukura has shown is that when driven to the extreme by detecting this light scattering from tiny objects in a microscope, this approach not only works with single biomolecules, but can also be used to measure their molecular mass, introducing a new way of weighing objects. The macroscopic equivalent would be to know the mass of a loaf of bread to within a few grams just by looking at it. Prof. Kukura hopes that this approach will be used widely to discover how biomolecules assemble, interact and thus function, as well as understand what goes wrong in disease, and how it can be addressed at a molecular level.

Organic chemist, Prof. Igor Larrosa is a world-leader in a sub-field of organic chemistry called carbon-hydrogen bond activation, which is focused on finding ways to make these normally stable bonds reactive. Specifically, he has established new mechanistic insights into how C–H bonds can react with transition metals, and developed novel catalysts for the facile construction of molecules that previously were only accessible through multistep organic transformations.

Prof. Rachel O’Reilly is a polymer chemist that has pioneered the use of innovative chemical approaches in the fields of DNA nanotechnology, sequence-controlled synthesis of polymers and precision synthesis to foster the development of novel materials. The novel molecules and structures produced from these methodologies have potential applications in healthcare, energy-related fields and sustainable chemistry.

Prof. Ewa Paluch’s novel discoveries are at the forefront of cell biology: she has elucidated key biophysical mechanisms of cell division and migration, and has established physiological roles of cellular protrusions known as “blebs.” Previously thought to exist only in sick or dying cells, she established that these protrusions on the cell surface are common in healthy cells, and that blebs have important functions in cell movement and division. Her work will influence treatment for diseases such as cancer, where cell shape and migration are key to disease pathology, and she is leading the field towards a complete understanding of how the laws of physics affect the behavior of cells.

Prof. Timothy Behrens is a neuroscientist whose work has uncovered mechanisms used by the human brain to represent our world, make decisions and control our behavior. An understanding of how our neurons function in networks to control behavior is fundamental to our understanding of the brain, and has implications for neural network computing, artificial intelligence and the treatment of mental and cognitive disorders.

Dr. Kathy Niakan is a developmental biologist conducting pioneering research in human embryonic development, elucidating early cell-fate decisions in embryonic cells. To further these studies, she became the first person in the world to obtain regulatory approval to use genome-editing technologies for research in human embryos. Her research may provide new treatments for infertility and developmental disorders, and her work in scientific policy and advocacy is defining the ethical use of human embryos and stem cells in scientific research. 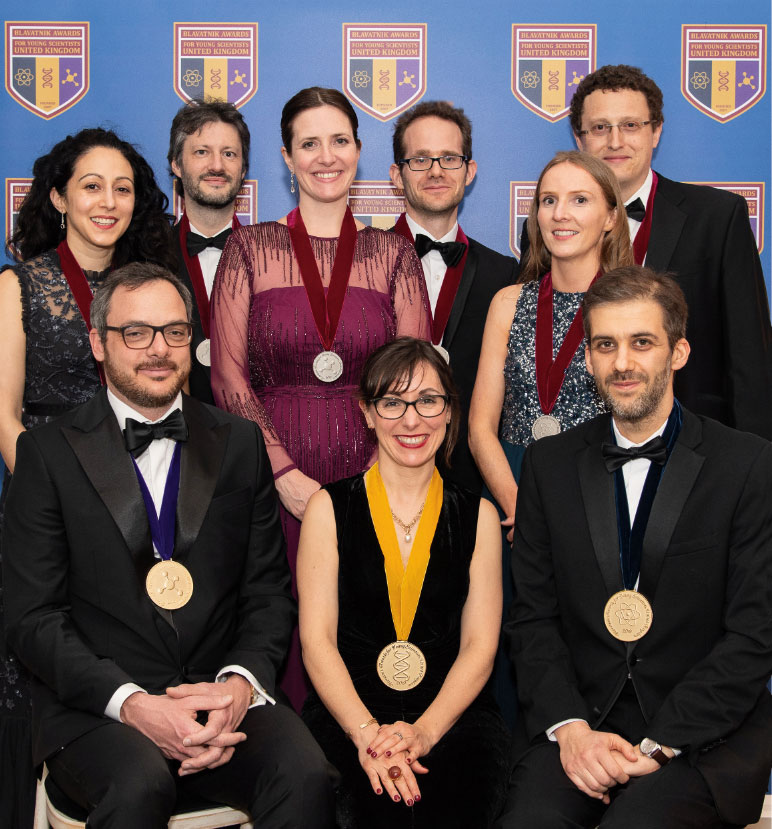