In a new book, Academy member and Rockefeller University Professor Donald Pfaff explains differences between how men and women have evolved to bond and cooperate.

Neuroscientists are very interested in discovering mechanisms in the brain that lead to our social behaviors. As we study social behaviors in laboratory animals, certain sex differences become obvious. Let's start with the first step, social recognition.

In the movie, The Changeling, the mother Christine (Angelina Jolie) knows without any doubt that the child returned to her by the Los Angeles police is not her lost son. Mothers know. Same for animals. The Harvard anthropologist Lucien Barbash-Taylor has filmed examples of female sheep, mothers who are being asked, in the name of farming efficiency, to take care of newly born lambs that are not their own. But do they recognize this? They can be fooled. If, and only if, within 24 hours of their giving birth, the foster lambs are covered with the foster mother's own amniotic fluid, the farmer has a win. That ewe will "recognize the kid as her own" and will take care of the foster lamb. This maternal behavior gives us an example of social recognition, and social recognition lies at the basis of all loving care. In fact, as I'll describe in this chapter, social recognition lies beneath all friendly behaviors. To befriend someone we must first recognize him and know that he will not harm us. 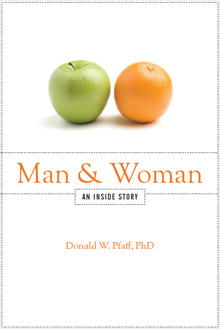 The people we grow up recognizing, and usually have a good, warm feeling about, and from whom we certainly should not expect harm, are those in our own family. Historically, we had the concept of an economic unit in which the mother, father, and children work effectively together; for example, on a family farm. The physical anthropologist Helen Fisher tells us in her book Why We Love that this kind of bonding became especially important for women after humans developed a striding walk. That is to say, this kind of pair bonding must have evolved by at least three million years ago, thus reinforcing the notion that these social behavior tendencies are basic and profound in our natures.

Women during pregnancy, and carrying small infants, could hardly do the running, hunting, and gathering as well as the male could. So, a mutually cooperative relation between male and female became essential. Monogamy, loyalty, and friendship all encourage our positive, helpful and, in a word, altruistic responses toward each other. As I said in my book, The Neuroscience of Fair Play, friendly, cooperative behaviors require brain mechanisms—hormonal, genetic, neural—that subsequently become available to support a wide variety of friendly, supportive behaviors that have nothing directly to do with sex or maternal behaviors. In evolutionary terms, that is, once the mechanisms required for male/female courtship and sexual behaviors are in place, they are at the service of more complex social relations of a positive, cooperative sort. And all of those friendly behaviors require social recognition.

Since identification of another as distinct from, or similar to oneself plays a major role in the chapter, I must ask: How exactly do we recognize others for who they are, as distinct from ourselves? We are beginning to piece together the molecular basis of social recognition through brain research on laboratory animals. As distinct from humans, whose visual and auditory capacities are so rich and strong, these laboratory animals tend to rely on smell. Because virtually all pheromones and other odors signal through basal forebrain pathways that lead to the amygdala, this collection of neurons once again comes into play. Pheromonal signals from the accessory olfactory bulb impact the medial nucleus of the amygdale, while volatile olfactory signals from the main olfactory bulb converge on the other amygdaloid cell groups.

Biologist Elena Choleris investigated these mechanisms when she was in my lab at Rockefeller University. Choleris, born in Italy and raised in Greece, now works in Canada, but has a Broadway-bound sense of humor. One day in my lab, she pointed at a drawing of the very small Y chromosome and wrote on it: "So small and yet so dangerous!" Elena studied female mice because among lower mammalian species, such as the rodent species, females form social bonds much more readily than males. These laboratory rodents, having poor vision and being nocturnal in their habits, depend largely on olfaction and on pheromones for their social recognition capacities. Choleris analyzed the abilities of female mice to recognize other females using precise assays that told us not only how the test females got used to females they recognized—and knew that those intruder females did not represent any threat—but also told us how the test females would reawaken their investigative responses when a new, strange female was introduced. We studied genetically normal mice, and then compared their social recognition performance to that of their littermates in which the oxytocin gene had been "knocked out," or either of two sex hormone receptor genes had been knocked out—estrogen receptor-alpha, or estrogen receptor-beta. We manipulated these sex hormone receptor genes because in lower mammals, many aspects of social behavior occur in hormonally-dependent settings connected with reproduction. Choleris found that "knocking out" any one of those three genes would significantly reduce all aspects of social recognition.

Choleris put those results together with a long and strong literature on the molecular actions of estrogens in the brain, and her understanding of how mice use olfaction and pheromones to recognize each other. She came up with a coherent story that links social behaviors to reproduction. The female mouse's ovaries secrete estrogens as the animal is getting ready to ovulate. Circulating in the blood, these estrogens are retained by neurons in the hypothalamus, and in those neurons the estrogens turn on the gene that codes for oxytocin (OT). The elevated levels of OT are transported to the amygdala. At the same time, the estrogens, having circulated in the blood, also are retained by neurons in the amygdala, where they turn on the gene for the oxytocin receptor (OTR). Thus, elevated levels of OTR are there, ready to receive and react to the OT transported from the hypothalamus. Choleris emphasized that concurrent expression of these various genes in their respective different locations in the forebrain would be crucial for social recognition to work correctly.

I have argued in my MIT book, Drive, that these primitive molecular and neuroanatomical relations have been retained in the human brain, and operate in much the same way. But, of course, our social relationships depend on myriad cultural habits and customs overlaying the primitive, sexy drives, and depending on our newly evolved cerebral cortex, even as, neuroanatomically, the human cerebral cortex overlays the human amygdala.

I note that Elena Choleris' model of social recognition, even in these laboratory mice, does not invoke a simple-minded statement that claims "one gene / one behavior"—i.e., turn on gene A and behavior B pops out. Newspaper reporters sometimes talk that way, because classically in genetics, decades ago, George Beadle and Edward Tatum, studying the fungus Neurospora, won the Nobel Prize for their "one gene / one enzyme" concept. But modern neuroscientists have moved beyond that. In my lab, to explain mechanisms for behaviors that are different between males and females, we have shown that patterns of genes govern patterns of behaviors.

Social cooperation would bounce from absent to present, depending on whether or not that single gene existed in an individual, in a manner that would not be sufficient to support a normal society, animal or human. If, instead, they assumed that social recognition and altruism were caused by "loosely coupled separate genes," then the potential would increase for the development of a variety of recognizable features across the population that would greatly foster altruistic behavior. Jansen and van Baalen's conclusion is important because it provides a genetic mechanism by which people could recognize each other as altruistic and behave appropriately even if they are not in the same family or otherwise related to each other.

Biologists have long ago grasped how social behavior networks have evolved among all animals with backbones, vertebrates, encompassing a range of animals from fish through the types of laboratory mammals whose maternal behavior I described previously. Even in fish, neurobiologist James Goodson and his colleagues at the University of California at San Diego can discern hypothalamic / amygdala relations of the sort that Elena Choleris identified. Goodson also sees that in fish, social behaviors in the form of vocalizations are linked to their requirements for reproduction. Birdsong provides us with another obvious example. In many bird species, males sing much more than females and use their songs to control their territories and attract females. But for the main arguments of this book, extending the story to higher mammals such as nonhuman primates and thence to humans is most important. In the words of Robert Axelrod, computer scientist at the University of Michigan, once the genes for cooperative behavior have evolved, natural selection of optimal social behaviors will operate and will produce "strategies that base cooperative behavior on cues from the environment."

Donald W. Pfaff, PhD, professor and head of the Laboratory of Neurobiology and Behavior at The Rockefeller University, is a brain scientist who uses neuroanatomical, neurochemical and neurophysiological methods to study the cellular mechanisms by which the brain controls behavior. He is the author of several books, and he will speak at the Academy about "Man and Woman: An Inside Story" on Tuesday, March 1 at 6:30 PM. For more information and registration details please see www.nyas.org/manandwoman.