The Little Magazine that Could

The Sciences, published by the Academy for 40 years, became one of the most honored science magazines in America. The contents of the entire run of issues is now available for members to enjoy online.

In 1961, the year The Sciences was born, the Russian cosmonaut Yuri Gagarin became the first man launched into space. Roger Maris hit 61 home runs, breaking Babe Ruth's record. Catch 22 was published. JFK and Nikita Khrushchev were in office, and one night in August the Berlin Wall was put up.

1961 was a banner year in science, too. Sydney Brenner and Francis Crick showed that the code for making the building blocks of any protein is a series of three consecutive DNA base pairs. Murray Gell-Mann and Yuval Ne'eman developed a scheme they called the eightfold way (later reformulated as the quark model) for classifying "elementary" particles. Louis and Mary Leakey discovered Homo habilis in Tanzania's Olduvai Gorge.

In those early days, The Sciences was a modest undertaking. The first issues amounted to little more than pamphlets, four sheets of letter-size paper folded once and stapled along the spine. But the New York Academy of Sciences nurtured the project through its fledgling years, and soon major scientists realized they could communicate with the public as well as their peers by contributing to its pages. The magazine gained a reputation as a small voice of reason and authority in the world of science writing for the general public.

My initial contact with The Sciences was a fairly typical first encounter. In 1980, fresh out of grad school, I landed in New York, where I decided to "become a science journalist." I contacted every science magazine I could think of about "writing something." Susan Hassler of The Sciences was the only editor kind enough to respond to my naïveté, and she took the chance of assigning me to do a brief story for the magazine's news section. After some editorial back-and-forth, my piece was published, unsigned, but in a form still recognizable to its author. I was on my way.

Like most magazines, The Sciences developed its own "stable" of scientist-authors, artists, freelance journalists, and, of course, staff writers such as Jonathan Weiner and Robert Wright who made regular or semi-regular appearances. Among the "outsiders" (i.e., nonstaff), the most important were designated "contributing editors"—a list that included the cartoonist Roz Chast, Stephen Jay Gould, Brian Hayes, Horace Freeland Judson, Laurence Marschall, Ashley Montagu, and Hans Christian von Baeyer. Artists were drawn from every style, every era, and every culture, but favorites, at least in my day, included those who might be described as neo-surrealists, such as Fanny Brennan, Alfredo Castañeda, Odd Nerdrum, Mark Tansey, and Kit Williams.

As a member, you can read or download any The Sciences article.

Soon, major scientists realized they could communicate with the public as well as their peers by contributing to the pages of The Sciences.

Perhaps the most amazing assembly of eminent scientists associated with The Sciences gathered in fall 1996 at the Academy for a celebration of the magazine's 35th anniversary. They included von Baeyer, the biologist and Nobel laureate Günter Blobel, the biologist Tom Eisner, the chemist and Nobel laureate Dudley Herschbach, Margulis, and the physicist/mathematician (and Fields medalist) Edward Witten. We invited these and 20 other leading scientists to list the three most important achievements of the preceding 35 years, the three advances they most expected in the next 35 years—and at least one example of their discipline's worst mistakes. Some responses were serious, some not so much. But what we had not expected—and what made the lists so readable—was the playful approach and sparkling wit from some of the world's smartest people, having a very good time. You can read their responses in "A Billion Seconds of The Sciences" (November/December 1996).

Art in The Sciences

Amidst all the scientific royalty, the one feature for which The Sciences was perhaps best known was its use of fine art. Successful offspring have many fathers, and several former chief editors have claimed major roles in inventing or advancing what became the most brilliant design decision of the magazine's history. In truth, though, fine art was introduced primarily to save money, not to enhance design. Commissioning original oil paintings or airbrush illustrations, as commercial magazines of the day were doing, was out of the question. Even original photography was quite expensive if it was any good. Rental fees for reproductions of paintings and sculpture, however, were quite reasonable. 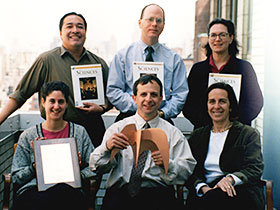 Reproductions of fine art were appearing in The Sciences by August 1966, under Samuel Burger, the first chief editor of record. Burger's successor, Peter D. Albertson (editor, 1966–1968), introduced more sophisticated layouts, which he continued decorating with art. Subsequent editors gave an increasingly prominent role to art, until Paul T. Libassi (editor, 1981–1989)—who once held the title Fine Arts Consultant—insisted that all images come from the arts. (Even Libassi, however, found, on rare occasions, that he had to admit a diagram.) The role of art had morphed into a signature feature, chosen to complement the scientific articles rather than simply to illustrate them.

Sometimes the interplay of science and art is straightforward yet striking, as in Rembrandt's self-portraits from young artist to old man that accompany an article on aging in 1991 ("On Growing Old," by Robert M. Sapolsky and Caleb E. Finch, March/April 1991). More often, though, placing artwork next to scientific text adds depth and reveals interpretive possibilities that neither the art nor the science could do alone. The abstract patterns woven into textiles by "Anonymous," which complement a 1996 article on the origins of the Internet ("Casting the Net," by Katie Hafner and Matthew Lyon, September/October 1996), or Yves Tanguy's paintings mashed up with an article on prime numbers,("Prime Territory," by Enrico Bombieri, September/October 1992), are two good examples of a synthesis greater than its parts.

Battle for the Bottom Line

But art, introduced as an economy, was beginning to have a substantial indirect impact on cost. Paper quality had been enhanced almost monotonically since the earliest days of The Sciences, until, by the Libassi era, the presses were running Cadillac-quality "body stock." The paper was a fine, bright, opaque and glossy sheet, the best possible medium for reproducing art. But fine paper is costly, and it weighs more per sheet than lesser stock, which drove up postage and shipping costs as well. By the time I became editor, in late 1989, these high production values, coupled with a "book size" (the page count per issue) pushing 80, were raising red flags for the Academy's management.

As things turned out, it was quite possible to produce a high-quality magazine with fewer pages and less luxurious materials. After a series of cuts, the issues settled in at around 48 pages each. A blue-ribbon panel of top editors and publishers, including Jacqueline Leo (at the time, the group editorial director for women's magazines of The New York Times), the late Charles Ramond (a financial whiz with a background in advertising research), and Dick Stolley (a Time-Life wunderkind who was the founding editor of People Weekly magazine), managed to stabilize matters for several years.

But the eventual demise of the magazine never seemed in doubt. Things came to a head in early 2001, when Academy CEO Rodney W. Nichols, ever skeptical about the membership value of the magazine, cut the frequency from bimonthly to quarterly. In the end, as we now know, that lasted one issue. After nearly 40 years of publishing, the Spring 2001 issue of The Sciences rolled off the presses—with a cover story on climate change intentionally titled to convey a double meaning: "Climate of Doubt."

There would be no summer.

The Sciences at Your Fingertips

Editor's note: Today, the legacy of The Sciences lives on—given new life by the Academy, in partnership with publisher John Wiley and Sons, Inc., by providing the contents of the entire run of The Sciences free of charge to Academy members through the Wiley Online Library. As a member, you can read any article online or download it as a PDF. To access, log in and visit "The Sciences." For assistance, contact Academy Customer Service at +1-800-843-6927 or customerservice@nyas.org.

Greatest Hits: A Sampler from The Sciences

Former editor of The Sciences Peter Brown provides a list of favorite articles from the past. Read them online.

The success of The Sciences in garnering the most prestigious awards in magazine journalism was so out of proportion to its size or budget that a year without winning or placing among the top five finalists at the National Magazine Awards was the rare exception. In the period 1985–2000 the magazine was either a finalist or a winner in the category "General Excellence (under 100,000 circulation)" in every year except 1992, 1994, and 1997. At the time of its closure in 2001, its lifetime record of seven wins put it in a four-way tie (with Business Week, Outside, and Sports Illustrated) for 11th place among all U.S. magazines.