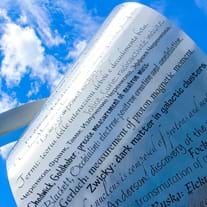 Next to the Globe of Science and Innovation at CERN, a giant ribbon-shaped steel sculpture pays homage to great discoveries in physics through the ages. 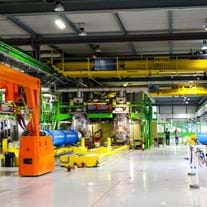 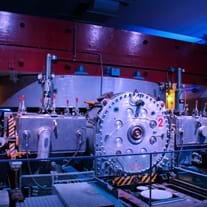 Imagine the inventor of the first-ever time machine reaches out to you and gives you a challenge. She says, "I will send you and two of your best friends two hundred years back into the past, but you have to create all the technologies that humans have invented over the last two centuries." Could you invent everything in that team of three? Do you think your friends could help you code all the programs, develop aircraft engines, create safe communication systems, and build a vehicle to take you to the Moon?

While a small group can make significant progress, I think we can agree that our present day would look very different if only three people were focused on finding breakthrough technologies. Fortunately, science has an amazing potential to unite people thanks to the single most effective engine of growth—curiosity.

Last summer, I had the privilege to travel along the Franco-Swiss border and visit CERN, the largest particle physics laboratory in the world. It’s one great example among many of curiosity pushing the boundaries of science and technology. Founded in 1954, CERN’s mission is focused on doing fundamental research in high-energy physics. And while it does that, it’s also bringing nations and scientists together.

In fact, it was the desire to help research processes become more efficient and make scientific publications more easily accessible that led Tim Berners-Lee, a British scientist at CERN, to invent the World Wide Web in 1989. This invention revolutionized the way we communicate and helped put the laboratory in its current position, allowing a global network of over ten thousand scientists from more than a hundred countries to work in collaboration together.

Today, scientists at CERN use the world's largest and most complex scientific instruments to study the basic constituents of matter—fundamental particles. These experiments produce an incredible amount of data, around 100 Gigabytes per second. This is so much data that not even a quantum computer could process it on its own! Luckily, there is a clever solution to process all that data. The solution involves a unique network of supercomputers–like the ones in my hometown, Budapest–which help each other filter and store the results.

The inventions of the last two hundred years have truly changed the way people communicate, maintain friendships, live, and work. I think we can agree that our society, as it continues to evolve, will benefit immensely if we do all we can to give opportunities to young students to discover the true value of teamwork and collaboration.

For that reason, I feel very lucky to be part of the Junior Academy. Thanks to this program, I have had the chance to form an international team with teammates from South Korea, India, the UAE and the US. We see eye to eye on so many things. We like one another’s cuisine, hiking, and the mathematics and physics we’re focusing on in our research. But when we began to work on making the ideas in our research project a reality, our differences became apparent.

Our South Korean teammate focused primarily on research processes and the technology side. Our American teammates brought a business perspective and questions of scalability. My European training left me somewhere in the middle: I liked the idea of making our research profitable, but I was leaning more towards the technology side. Over the months, the creative clash of viewpoints bred success. Together we managed to develop methods which could be used in creating more efficient solar panels.

Needless to say, I am very excited and optimistic about the future of science. My experience makes me think that the next breakthroughs are going to come from collaborations across seemingly different fields. For example, using supercomputers to help us study neuroscience, or particle physicists developing new approaches to fight cancer. And I’m sure we’ll be embracing artificial intelligence in ways we don't even expect, from filming more immersive wildlife documentaries to making risk-free autonomous vehicles.

Last but not least, I believe quantum computing paired with new information technologies will continue to help old and new scientific networks flourish, and as a result, it will help create genuine friendships and bring cultures together.

Now an Academy Ambassador, Patrick first came to the Academy as a Junior Academy participant. He was also part of CERN's 2017 S’Cool LAB Summer CAMP. While there he not only engaged in research, he also produced the official promotional video for the program. He is currently specializing in Natural Sciences at Jedlik Anyos Grammar School​ in Budapest. Find him on Twitter @PatrickBP98

You can harness the power of networks to create innovative solutions to the world's challenges by taking part in the latest Academy Challenge. We're partnering with Lockheed Martin to instigate new, disruptive ideas in aerospace and security. Learn more.

Take part in an Academy Challenge