Overcoming Doubts with Help from Advisors and Role Models 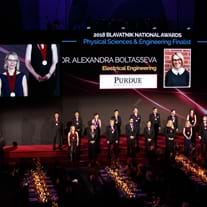 Alexandra being honored at the 2018 Blavatnik National Awards for Young Scientists ceremony. 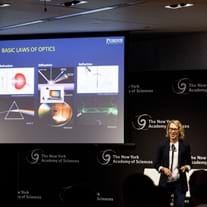 Alexandra giving a talk at the 2018 Blavatnik Science Symposium.

Alexandra at the 2018 Blavatnik National Awards for Young Scientists ceremony.

I was born in Kanash, a small town on the Southern route of the famous Trans-Siberian Railway in modern day Russia. Being from a small town in the middle of nowhere, one of the first questions I’m often asked is how I got into science. I have often repeated the same answer: “I have always been fascinated by technology and devices.” But the truth is that I have always been fascinated by a much simpler thing – the world around me.

All my life I was blessed to have the most devoted and inspirational people around me. As every child, I loved to come to my parents’ work. Both engineers, my parents worked for railway-related organizations. My mom has a degree in applied mathematics and was on the team who installed the very first computer at the local train repair plant. My dad was the head of a small radio communications laboratory that controlled train communication lines between two of the nearest cities - Nizhnyi Novgorod and Kazan. At his lab, I loved playing with colorful resistors and wondered what they actually did while flipping through Rudolf Svoren’ book Electronics: Step by Step.

In middle school, my life changed because of my physics teacher Valery V. Gorbenko. His true love for physics and devotion to his students opened up a world beyond my small-town school. I joined his after-school physics classes, and soon after participated and won the physics Olympics in our republic. Being a girl meant you were outnumbered at physics competitions, but I never asked myself whether I should do it, I just joined in. I wanted to make my teacher proud.

"I realized having doubts and accepting that you don’t know everything is what motivates people to learn and explore."

It was never a question whether anyone in my family should get a college degree. Everyone knew that doors open when you get a degree. While I was interested in particle physics in high school, soon after I started at the Moscow Institute of Physics and Technology, I became interested in applied physics. I wanted to do something that would make a difference now instead of decades into the future. I had amazing advisors during my Bachelor and Masters projects at the Lebedev Physical Institute of the Russian Academy of Sciences who introduced me to an emerging area of quantum-well lasers, and who taught me how to manage my time.

My nanotechnology adventures started at the Technical University of Denmark where I did my PhD studies working in one of the very first Scandinavian Cleanrooms learning about nanofabrication. Focusing on how to bring light down to nanoscale, I was very fortunate to have great role models such as Ursula Keller and my university advisor, Sergey Bozhevolnyi (with whom I still collaborate very actively today).

I don’t think I ever felt “out of place” in the male-dominated college or research communities. For me, it was not about being female, it was about being insecure (though I admit these two things are connected). During the earlier stages of my career, I had difficulty convincing myself that I was suited for academic work. Sometimes I wanted to quit science and open a flower shop.

Once during my postdoctoral work, I felt particularly blue and seriously doubted whether I should stay in academia. In that moment, I spoke with my former PhD advisor who is a very well-known, established professor. I told him I wasn’t good enough at what I do and that I was filled with doubts. His reply surprised me: “Same here - I still have doubts about whether I am doing what I am good at.” He added that only ignorant people would ever think that they are great at something. In that moment, I realized having doubts and accepting that you don’t know everything is what motivates people to learn and explore. I am still learning to believe in myself, but the biggest reward is to share what I do know and feel passionate about.

Role models and mentors played a crucial role in Alexandra’s career development, allowing her to now serve as a role model and mentor to others. Become a mentor today.

2018 Blavatnik National Awards Finalist, Alexandra Boltasseva, PhD, is a professor of Electrical and Computer Engineering at Purdue University working in the areas of optics and nanotechnology. She is also a mom of three and lives with her family in West Lafayette, Indiana.