Student Gets an Insider's View of Nobel Week 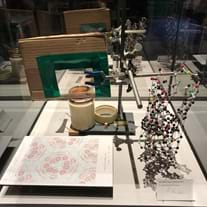 Materials and models used by Richard Henderson, 2017 Nobel Laureate in Chemistry, on display at the Nobel Museum for the 2017 Ceremony. 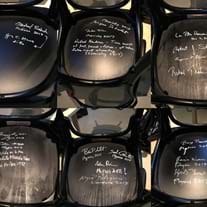 Nobel Laureates sign the chairs where they sat at the Nobel dinner.

Talar Terzian, 16, a participant in both The Junior Academy and 1000 Girls, 1000 Futures who lives in Florida, was invited to travel to Stockholm, Sweden, for Nobel Week. Below she shares highlights from her experience.

As I landed in Stockholm, there was a luminescent aura from holiday lights that filled the city. These first impressions left a glowing feeling of excitement in me as I entered the city that hosts the Nobel Prize Ceremony. I had the privilege of being selected by the National Society for High School Scholars to attend Nobel Week and to experience the Nobel Lectures firsthand, as well as to embrace Swedish culture.

These once in a lifetime cultural and scientific experiences expanded my knowledge of the Nobel selection process, forged lasting friendships, and secured global science connections. With help from the New York Academy of Sciences, I was able to meet Chemistry Laureates, Jaochim Frank and Jacques Dubochet, members of the Nobel Selection Committee, along with executives of the Royal Swedish Academy of Engineering Sciences (IVA). I also met with faculty from Stockholm University to learn about the contributions of past and present Nobel Laureates.

In Stockholm, I visited the sites where the decisions to award Nobel Prizes are made and where the celebrations are held. There I not only got a sense of the history of this prestigious prize but also the deep reflection that goes into awarding them. Being in those spaces gave me a taste of the prestige, pomp, and circumstance that make this event truly exceptional for the honorees. At Stockholm City Hall, where the Nobel Banquet takes place, I saw the planning and attention to detail (right down to the imported flowers from Italy) that make this event a spectacular showcase.

The feeling of being in the presence of greatness did not end with the Nobel Laureates and their lectures. One of the most exciting evenings I attended in Stockholm was a celebration for Vera Sandberg, the first female engineer in Sweden. At the event, I had the honor of talking to Dr. Bjorn Nilsson, former President of the IVA; Dr. Johan Weigelt, Executive Vice President and Secretary to the Academy; and Binette Seck, Client Manager of the Work Leap internship program at IVA. Afterwards, we went to Grodan, a traditional Swedish restaurant, where we talked the night away about the Work Leap program for refugee scientists and the Tech Gap program for high school students. These programs offer participants a chance to experience what it’s like to be an engineer.

Like the Academy, IVA is focused on helping to engage students in STEM careers. While I was learning about their programs, I shared my experiences with the Academy’s Global STEM Alliance. There was an air of mutual admiration and a shared global vision of cooperative science that was later echoed in the lecture, given by this year’s Nobel Laureates in Chemistry. Dubochet’s talk was my favorite because he called for sharing scientific knowledge and the need for science to be done with a conscience.

My experiences during Nobel Week left me with a renewed commitment to scientific research and global cooperation with both young and old scientists and engineers. As Lennon said in his famous song, “Imagine” which was played at the end of the chemistry lectures, “We are one world that must live and grow in cooperative peace.”

There's no better time than National Mentoring Month to apply to mentor talented young women like Talar. You can help another young woman like this participant in our 1000 Girls, 1000 Futures program. Find out more information and apply here.

Mentor the next generation