A fresh take on one of the world’s most polluting industries. A remedy for bias in artificial intelligence algorithms. A suite of strategies for delivering COVID-19 vaccines in remote regions. A new approach to boosting diagnostic accuracy in telemedicine. While these may sound like agenda items for major corporations or governments, they’re actually snapshots of projects sprung from the minds of four teams of teens who took the top prizes in a series of New York Academy of Sciences’ Junior Academy Challenges. These competitions pair groups of high school students from around the world with scientist mentors to devise solutions for timely global problems. Representatives from each winning team presented their proposals at the Global Stem Alliance Summit, convened virtually on July 20-21, 2021.

Challenge participants teamed up in late 2020 and early 2021 to solve one of several challenges posted on the Academy’s custom collaboration platform, Launchpad. Virtual collaborations ensued, crisscrossing continents until each team, with the guidance of their mentor, arrived at a solution. The winning proposals—the collective work of 22 students representing 10 countries—shared a common goal: to promote sustainable, equitable care of people and planet.

When Vanishka Pandey first encountered the Green Textiles Challenge, she was surprised by how little she knew about the environmental impacts of the fashion industry. “People don’t realize the gravity of the issue,” she said, noting that clothing production generates about 20% of the world’s industrial water pollution and 92 million tons of waste each year. Pandey and her teammates were drawn to the challenge because the issue is both scientific and societal, requiring technical and behavioral solutions. This is an area where “the common masses can play a key role in bringing about change,” she said. 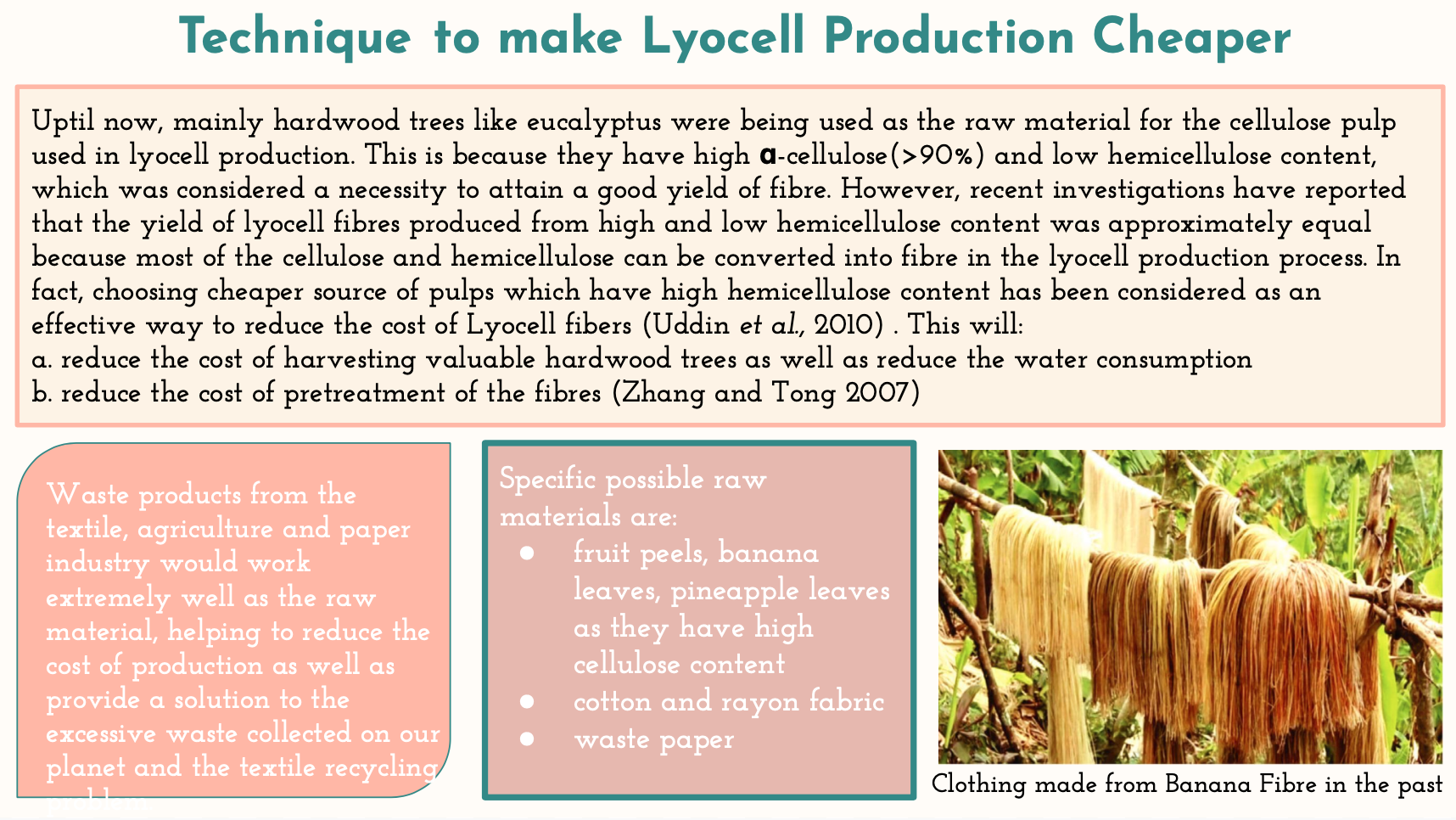 The team, aptly named Peace of Clothing, presented a series of sustainable swaps for current practices in textile production, clothing manufacturing, and consumer behavior. These include reducing reliance on cotton, one of the thirstiest and “most chemically intensive crops in the world,” according to the National Wildlife Federation, in favor of greener fabrics. One such material, lyocell, can be made from recycled wood pulp but is costlier than cotton. Tapping the byproducts of the paper and agriculture industries as a source of plant fibers could help shave the cost without sacrificing quality, according to the team’s research. They successfully devised methods for improving wastewater treatment from textile factories and replacing potential contaminants used in fabric treatment, such as formaldehyde. Pandey and her team also aim to influence purchasing decisions with the help of an ad-supported custom mobile app that connects consumers to sustainable brands that refuse child labor and prioritize worker safety.

While Peace of Clothing was one of the more far-flung teams of winners—its six members span five countries across four continents—their geographic diversity turned out to be an advantage. While most members, including Pandey, in India, struggled with pandemic restrictions, Egypt-based Sandy Ekladious was able to perform lab work and visit a textile factory for a firsthand look at the industry. Despite the difficulties of completing experiments and scheduling meetings—a challenge all teams grappled with—the struggles were worth it for the end result. “We’re proud to call it our own,” Pandey said.

Finding evidence of bias in artificial intelligence (AI) algorithms takes no more time than a simple web search. As Tanish Kelkar, leader of the winning team in the Bias in AI Systems and Applications Challenge, explained, a query for the term “healthy skin” will produce predominantly images of white people, while searches related to crime or substance abuse serve up more images of people of color. But Kelkar and his team, AI404: Bias Not Found!, are concerned about more than just the AI algorithms that guide online browsing. “Discriminatory predictions in high-impact sectors like the judiciary and healthcare can have broad implications for society,” he said. 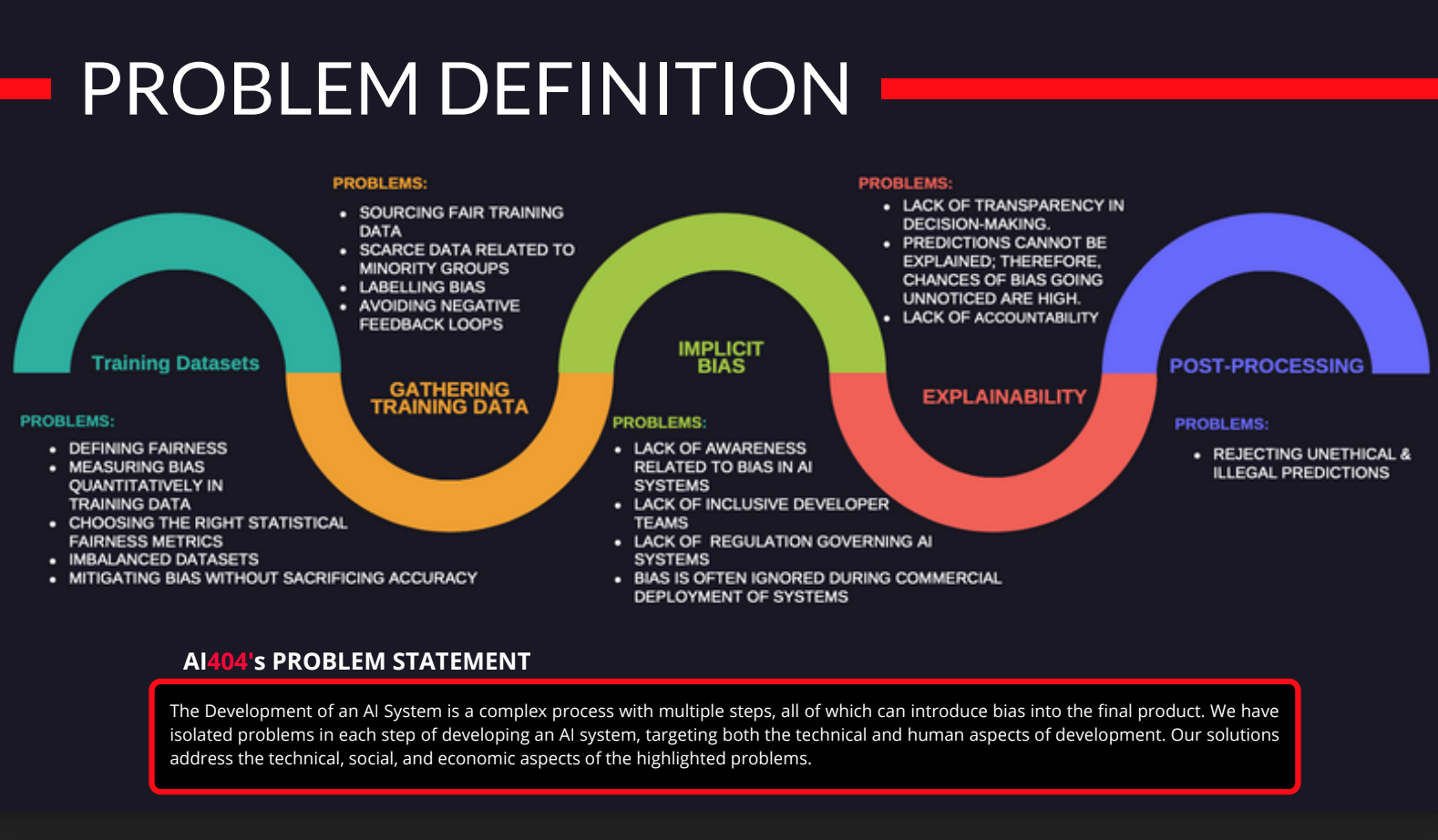 Kelkar has witnessed the destructive effects of discrimination in his hometown in rural India. When presented with the opportunity to address a bias-related problem, he jumped at the chance to use his skills—“I’m a tech geek at heart,” he said—to make a difference. Knowing that biased data produce biased predictions, this team of “ambitious creators” created a plan to root out bias at each step of the development process, from the raw datasets all the way to the personal beliefs of the software developers. “We targeted both the technical and the human aspects of development,” said Kelkar.

The team’s central innovation is a novel application to measure bias in raw datasets using fairness metrics. “As simple as it sounds, an application like this had never been created before, and required a high level of expertise,” Kelkar said. Paired with post-processing algorithms that re-screen for bias in AI predictions, as well as guidance for developers to consider the potential impact of their own implicit bias on their work, the team’s solutions are a step toward “fair and inclusive intelligent systems for all.” The group also proposes boosting the security of data collection processes using methods such as homomorphic encryption, which could improve the diversity of training datasets and encourage institutions, such as healthcare systems, to share real-world data with researchers.

Team Karikó, named for mRNA vaccine pioneer Dr. Katalin Karikó, took aim at the challenge of how to safely and quickly deliver COVID-19 vaccines to a global population. Issues with vaccine distribution loom large in remote areas and in developing nations, where lack of infrastructure, difficult terrain, and a dearth of healthcare staff can hinder deployment. In selecting Indonesia as a model for their solutions in the Global Vaccine Distribution Challenge, the team faced a unique set of obstacles: Indonesia is the world’s largest archipelago and home to the fourth-largest population on the planet. By some estimates, it could take a decade for the country to reach full vaccination without significant intervention. “The complexity made this an interesting topic to tackle,” said Maanit Goel, who led the group’s holistic approach to reimagining vaccine distribution. 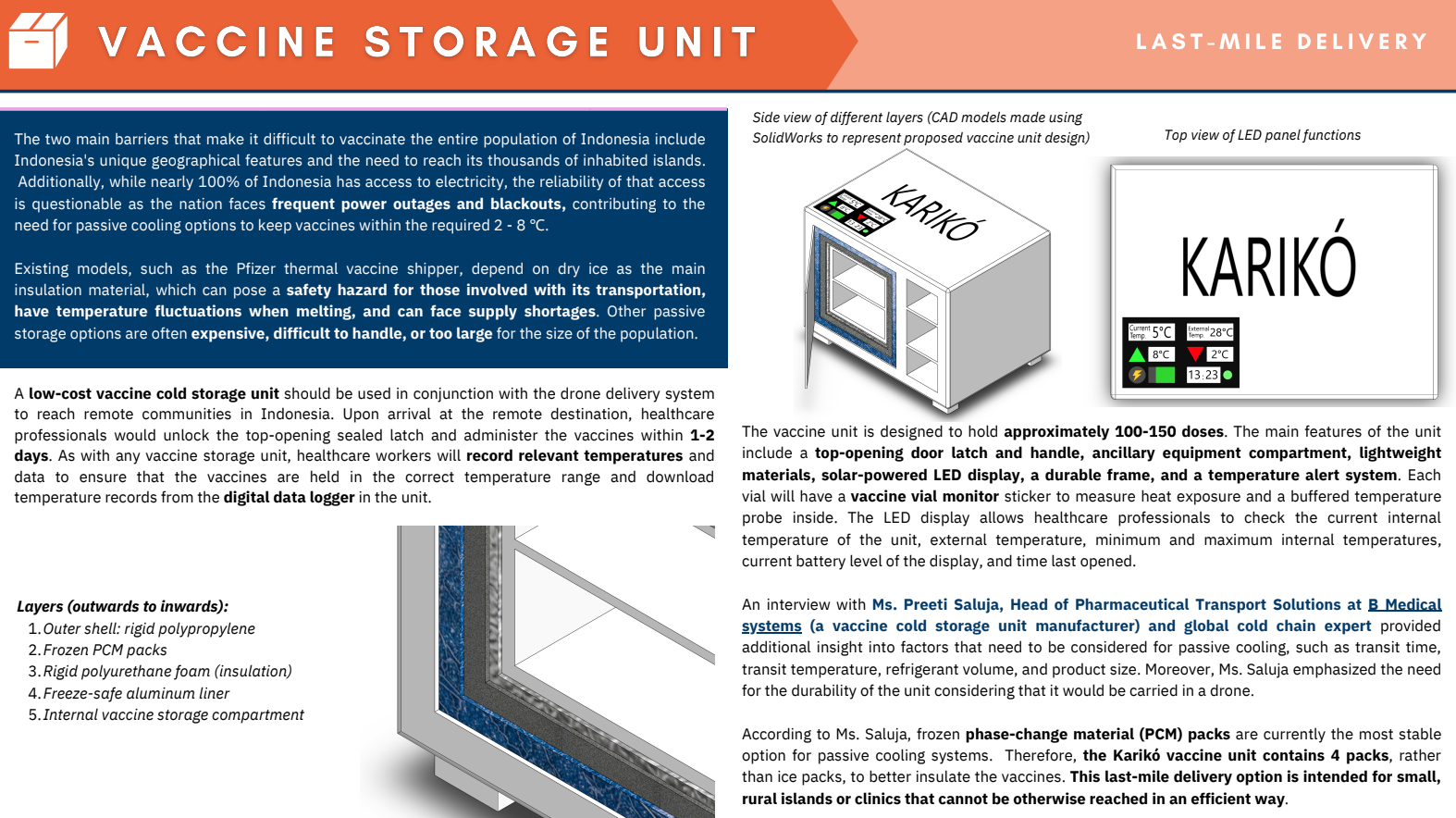 Goel and his group envision a drone-based vaccine delivery system, with each craft toting a custom-designed vaccine storage container. Passively cooled using a non-hazardous alternative to dry ice, each storage unit maintains the freezing temperatures required of many COVID-19 vaccines for 1-2 days after opening—an essential feature in a tropical climate with intermittent electricity. Tapping the power of spatial data science, the drones would be directed to drop sites that allow local workers to quickly reach the largest number of people across Indonesia’s thousands of islands.

Solving the vaccine crisis in Indonesia will take more than clever delivery methods, however. Vaccine misinformation is rampant, as is distrust of the vaccine supply chain. Much of the controversy centers on concerns about the maintenance of strict halal standards during vaccine production and transport. Implementing the use of Hashgraph, a distributed ledger technology similar to blockchain, along with IoT tracking sensors, would boost supply chain transparency and offer crucial reassurance. A public online platform offering easy access to COVID-19 facts and vaccine scheduling may promote vaccine acceptance, facilitate access, and counter misinformation.

The COVID-19 pandemic cast a spotlight on telemedicine, with record numbers of patients and clinicians turning to virtual care platforms since early 2020. Telemedicine could revolutionize the care of elderly patients and expand access to quality medical attention for those living in rural areas, but improvements in digital infrastructure and accessibility are required. 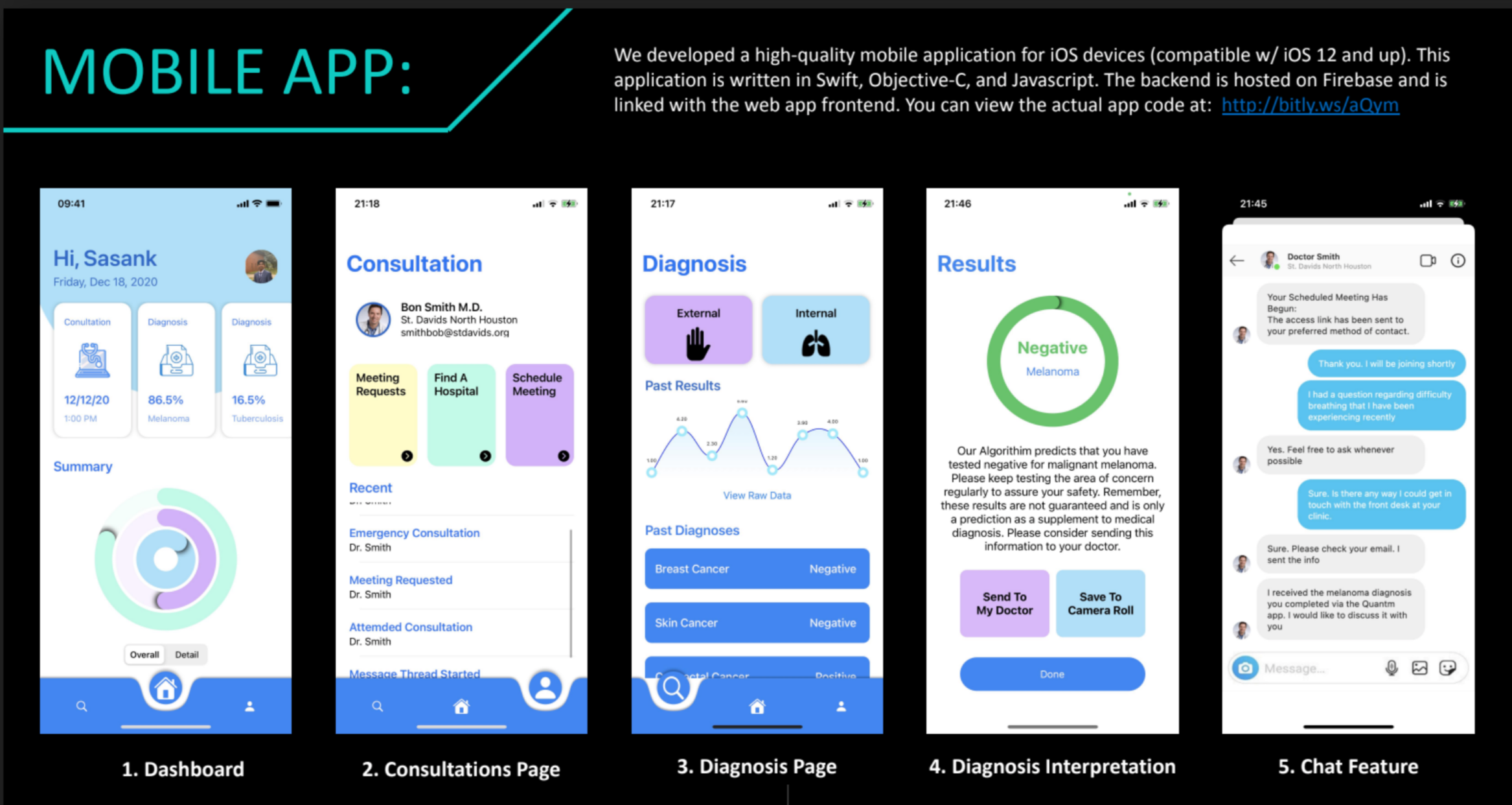 In their approach to the Healthcare On-Demand: The Future of Telemedicine Challenge, Team Solexa, led by Roland Yan, addressed both technological and consumer-facing challenges with QuantM, an all-in-one online platform for healthcare providers and patients. QuantM introduces elements of quantum machine learning to improve the training speed and accuracy of healthcare AI algorithms used for diagnostics and disease progression. In testing their custom algorithms, the team noted improvements in diagnostic accuracy for datasets of breast, colon, and skin cancers, as well as cardiovascular disease. The consumer arm of QuantM is a secure, HIPPA-compliant app that connects clinicians and patients for telehealth visits. In addition to video chat, the app allows patients to access test results, report symptoms, and even snap photos of areas of concern—such as suspicious skin moles—for AI-guided analysis.

This year’s Challenge winners came away from the competition with much more than an accolade to add to their resumes. Team leaders extolled the dedication and camaraderie among their teammates as they persevered together, across the world, through a historic and difficult year. Wisdom gleaned from their mentors—and from each other—won’t easily be forgotten. “In one discussion, our mentor told us to always focus on the journey, never the destination,” said Tanish Kelkar. “That was memorable.”

Winners of the 2021 Junior Academy Challenges

Learn More About Our Challenges