Undying Love of Science Leads to a Bright Future

An Undying Love of Science Leads to a Bright Future 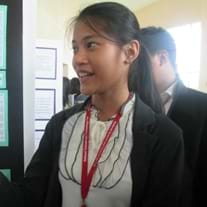 Florence explaining her project at the National Science and Technology Fair. 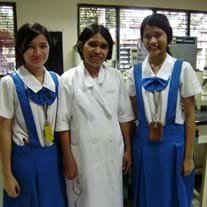 Undertaking experiments at the Department of Agriculture with classmates. 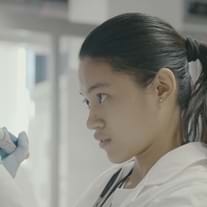 When I was six, I wanted to become an astronaut. I was serious. But, no one believed me.

In a developing country like the Philippines, being a scientist is not a practical career to envision. Here it is common for children to realize that they have to pursue more “practical jobs” once they grow up. Or, at least, we are expected that we’ll come to this realization. Many, especially those who are less privileged, succumb to society’s expectations. But, the passionate ones rebel.

Science is one of my true loves. Time and again, I fall in love with different fields of science. After years of watching National Geographic every day, I developed a passion for astronomy at a young age. Later, I became involved in caring for animals (especially critically endangered species endemic to the Philippines), so I became interested in biology. But when I was seven years old, I contracted dengue fever, and after barely surviving an episode of hemorrhagic shock, I thought about becoming a lawyer instead of pursuing science in order to conform. However, science still called out to me. I developed an inexplicable ardor for chemistry and began to secretly dream about becoming a chemical engineer.

Studying in a public science high school, we were required to do a research project before graduating. As I thought of what topic to pursue, I remembered the days when I was sick with dengue. There was an epidemic at that time so my parents had to bring me to several hospitals before finding one with an available room. During epidemics, the less privileged have no other choice but get admitted in hospitals where they share a bed with five or more patients, and receive substandard care in their often-fatal condition.

Since there’s currently no cure for dengue, many people rely on herbal plants that were known to relieve the symptoms of dengue. So even when I was admitted in one of the top hospitals, I was still administered concoctions from Euphorbia hirta Linn., a weed known in traditional medicine believed to cure dengue and increase platelet count. However, there is no scientific evidence to support this practice. This situation inspired me to compare the platelet-increasing activity of different local herbs. I then found flavonoids to be a common compound in those plants which I tried to extract and test for platelet increasing activity. That year, I became the youngest qualifier for our country’s National Science and Technology Fair, where I presented my findings. However, due to the lack of laboratory equipment and technology, extraction of flavonoids was done through simple ethanolic-hydro-distillation and its presence was verified through sodium hydroxide and ferric chloride tests. Later on, I found that my study might've been confounded because the techniques I used didn't guarantee that only flavonoids were present in the extract and that other compounds could have also caused the increase in platelet counts. These constraints caught me in a standstill and without anyone to guide me, I felt hopeless — I didn’t know how to continue this project.

When I was about to graduate high school and people asked what I wanted to study in college, I would answer, “Isn’t there anything like bio-chem-physics? I want to study all sciences!” I was so passionate about science I couldn’t choose a single field. So, I did something that was unacceptable in the society I grew up in — I took a gap year. I wanted to become a world-class scientist so I secretly applied to schools abroad. During that year, I also mentored some high school students but since I wasn’t an expert yet, I could only guide them on the scientific method and help them with their papers.

I once again took the road less travelled when I chose to go to a new school, called Minerva Schools at KGI (Keck Graduate Institute). Minerva’s learning platform made it possible for me to travel around the world and I took this opportunity to explore how STEM is being conducted in different countries. While visiting several museums and institutes in Europe, I finally became enraptured by physics — the only field I still had a love-hate relationship with. While in Korea, I got to work at the Institut Pasteur. There, I had mentors who taught me various laboratory techniques and how to thrive in this field, especially as a woman coming from an underprivileged background. Once again, I have hope, and it is my hope that someday we can find effective, affordable, and sustainable cures for infectious diseases such as dengue.

Whether or not you are able to travel from your home country, you can still meet and learn about science and scientists from around the world through our Global STEM Alliance programs. Learn more here.

As an advocate for STEM education, Florence Pauline recently became an Academy Ambassador to help spread awareness and increase the accessibility of STEM programs to young. She is currently studying natural sciences, with a concentration in drug discovery, at Minerva Schools at KGI. She started her work in infectious diseases at the Applied Molecular Virology Laboratory of Institut Pasteur Korea. She will be joining this year's Global STEM Alliance Summit and aspires to be a mentor in the near future. Find her on Instagram @tigerheartstars and Twitter @TigerHeartStars.

Experience Science from a Global Perspective

Participate in our Global STEM Alliance