What Makes Human Milk Different and How Does it Help Developing Babies? 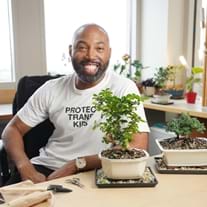 It is well understood that human milk provides numerous benefits to babies as they develop, particularly in its ability to help protect babies from a variety of infections. But what is the mechanism that is doing the work to help keep babies healthy?

Organic chemist Professor Steven Townsend of Vanderbilt University speaks to us about his research on human milk oligosaccharides (HMOs) and their role in developing babies’ microbiome and preventing infection. He also discusses the importance of sharing his science with the general public.

Your work has focused on human milk oligosaccharides. Can you explain what these are and why they are important for an infant’s health?

HMOs increase the health of the infant in a number of ways. These molecules selectively feed commensal (good bacteria) over bad bacteria. They also protect against bacterial infection by mimicking molecules that pathogenic bacteria use to attach to the gut – the HMOs bind to these pathogens instead and remove them from the system. Recently my group has discovered that these compounds also have intrinsic antimicrobial activity – they actually inhibit the growth of pathogenic bacteria.

Together, these factors mean that the microbiome of a breastfed infant is selectively engineered to have more commensal species present, outnumbering pathogens and potential pathogens.

How did you become interested in the biology of human milk?

How does human milk differ from formula?

When it comes to milk broadly, the main constituent macromolecule is typically lactose, a sugar (carbohydrate). Most bigger animals also have a lot of protein in their milk, usually one third of the macromolecules, but human milk is different, as only about 6% of the macromolecules are proteins. For human babies and primate babies, it's more important for our brains to develop faster than our body, which requires more carbohydrates.

Primate milk has a large quantity of complex sugars with a variety of activities – some of the sugars are involved in brain development and some of them are involved in the development of the immune system. Interestingly, we know that for many of these sugars, the baby does not get calories from them, even though they consume grams of them per day. It turns out that the sugars are actually fermented by bacteria in the gut. These sugars are selectively consumed by good bacteria to give them a growth advantage over bad bacteria. Therefore, if they are not present in formula, then formula-fed babies are going to be at a slight health disadvantage.

Are there any other uses for HMOs besides in the development of an infant's biome?

There are a lot of companies attempting to put HMOs into different food products, for both infants and adults. For example – some companies are trying to develop products for irritable bowel syndrome and other illnesses that are related to a screwed up microbiome.

In my group, we are investigating if HMOs can help antibiotics work more effectively. Many antibiotics have been mis- and over-used and a lot of them are no longer effective. Our research is finding that co-dosing certain antibiotics with human milk sugars results in a synergistic effect – they work together, which means that you can ultimately use less of the antibiotic to kill a bacteria. That's cool because antibiotics have a lot of negative side effects, but HMOs don't have side effects.

You often drescribe yourself as a humanist. How does this inform your scientific research?

When I say I'm a humanist, I mean I care about people's day-to-day wellbeing.

The humanist part of me is enhanced by communicating the results of our research with the public and getting feedback on different directions that we could pursue. We're getting a lot of good project ideas from talking to a broad range of people. It's very important to me that the general public understand the science we're doing at a fundamental level because they fund it—I think we owe it to them to explain the research we’re doing and get their feedback.

Want to learn more about natural products including HMOs and more? Register to attend Natural Products: From Discovery to Therapeutic Applications on March 18th.