Which Stories Are Inspiring Young Women in STEM? 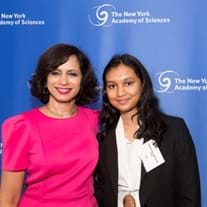 Encouraging more people to consider STEM careers can be as simple as sharing stories about others who are doing amazing work in those areas.

“For me, a good story is everything – it’s like being in a dream, it entertains, teaches lessons worth remembering for a lifetime, and educates,” said Rebeka Olah, 17, from Debrecen, Hungary.

With inspiration in mind, this year, Johnson and Johnson launched a storytelling contest for participants in the New York Academy of Sciences’ 1000 Girls, 1000 Futures program.

Participants wrote about their favorite female STEM superheroes for a chance to win a trip to the Global STEM Alliance Summit at the Academy’s headquarters in New York City.

“We need female STEM superstars to be visible so they can inspire the next generation of STEM superstars,” said Maud Webster, 17, from Norwich, England.

After reading all the essays, J&J selected four finalists and a winner: Rebeka and Maud (both quoted above), along with Ngoc Huynh, 17, from Cairns, Queensland, Australia; and Bethany Yuan, 17, from Nanjing, China were named finalists, and Anagha Honnali, 17, from Mysuru, India, was named the winner.

For many of the honorees, writing about STEM superheroes was a natural fit because role models had already motivated them in their studies.

Maud jumped at the chance to write about her inspiration, Fiona Stanley. Fiona, an Australian epidemiologist, is most noteworthy for her work in public health. Fiona’s work across both biology and health science, and her use of statistics were particularly fascinating for Maud.

In her essay, Ngoc wrote about Canan Dagdeviren, a Turkish engineer. Ngoc was particularly inspired by Canan ability to see the world through patterns and data that she’s compelled to investigate. The engineer also sings in seven different languages. This has helped motivate Ngoc to explore activities outside of her studies.

It was Ellen Stofan, a former NASA scientists, who inspired Rebeka in her essay. And Anagha wrote about Francoise Barre-Sinoussi, a Nobel laureate and one of the people who discovered HIV. Despite this discovery, few people know much about Francoise. Anagha admitted to not knowing much about her either before writing about her.

As an added upside to winning the contest, Anagha is now considering continuing to write while she pursues her career in STEM.

“I wanted to inspire with my work. I wanted to show that nothing is impossible and that there are interesting things, people, and jobs out there.”

And each of the finalists also found benefits beyond the recognition for their essays, whether it be a boost to their confidence, encouragement to take on new challenges, or the excitement of traveling to the Academy in New York City.

“It was powerful and awe-inspiring to attend the summit and meet my fellow finalists, who are all lovely and full of so much potential,” said Maud.

J&J has posted all these young women’s essays on their website, along with video interviews.

To learn more about 1000 Girls, 1000 Futures program, and the Academy’s other mentoring programs, check out the students’ opportunities page.

Learn more about our mentoring opportunities