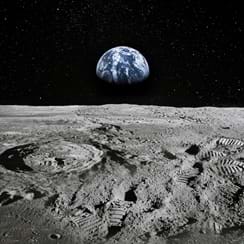 A Closer Look at the Next Moon Landing

We’re going to the Moon—again! In the next decade, NASA’s Artemis program will first orbit and then land on the lunar surface. What may seem like a rerun from the 1960s is designed to establish a more permanent human presence on the Moon. This will be used for both scientific and private aims, and it may serve as a stepping-stone to Mars. In this eBriefing, we’ll learn more about what’s planned, what we gain from human space exploration, and how we establish international agreements off-planet. 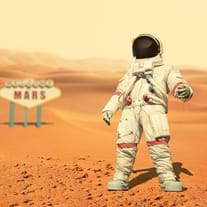 A Closer Look at the Next Moon Landing

Timiebi Aganaba, PhD, LLM, is an assistant professor in the School for the Future of Innovation in Society with a courtesy appointment at the Sandra Day O'Connor College of Law. She is a fellow at the Centre for International Governance Innovation (CIGI) based in Waterloo, Ontario, Canada. Dr. Aganaba was previously executive director of the World Space Week Association, coordinating the global response to the United Nations 1999 declaration that World Space Week should be celebrated from Oct 4-10 annually. Dr. Aganaba was a space industry consultant for the leading space analyst firm in Montreal, Canada, a teaching associate at the International Space University in France, an associate at the Nigerian law firm Kayode Sofola and Associates, and a trainee legal officer at the Nigerian Space Research and Development Agency. In 2017, Dr. Aganaba was the recipient of a Space Leaders Award from the International Astronautical Federation (IAF). Her doctorate received the George and Ann Robinson Award for advanced research capabilities.

Dina Contella’s tenure at NASA began while she was still in school through the cooperative education program in 1990. After graduating from Texas A&M University, Contella worked as an astronaut instructor specializing in the Shuttle onboard computers and software, as well as entry and landing navigation aids. Beginning in 1995, she served as a space shuttle and space station flight controller and instructor responsible for planning, training, and executing spacewalks. She subsequently served as the lead Extravehicular Activity Officer (EVA) liaison to Russia during early station construction. After the Columbia accident, she was instrumental in developing shuttle Thermal Protection System (TPS) repair tools and techniques. And in her nine years as Mission Control Flight Director, Contella oversaw the well-being of the International Space Station, space shuttles, and their crews for a host of missions, leading teams of people operating vehicle systems and guiding astronauts building the space station, performing research, and maintaining it both inside and out. Now the Gateway Program’s manager for operations integration and utilization, she uses her experience in operational leadership and risk management to develop how to best use the Gateway’s capabilities and plan for astronaut missions on the Moon.

As director for the Translational Research Institute for Space Health (TRISH), Dorit Donoviel, PhD, leads a $0.25B NASA-funded innovation R&D program that finds, funds, and facilitates disruptive human health and performance solutions for astronauts traveling in deep space. In her previous role as deputy chief scientist of the National Space Biomedical Research Institute (NSBRI), Dr. Donoviel led both domestic and international research programs that bridged academic, industry, and government resources to deliver fast and cost-effective tangible results. She is the recipient of multiple honors, including recognition from NASA and the NSBRI Pioneer Award. A published research scientist and invited speaker, Dr. Donoviel is Associate Professor in the Department of Pharmacology and Chemical Biology and the Center for Space Medicine at Baylor College of Medicine (BCM). Before joining BCM, she led metabolism drug discovery programs at Lexicon Pharmaceuticals for eight years. Dr. Donoviel completed a Human Frontiers postdoctoral fellowship at Mount Sinai Hospital in Toronto, Canada; holds a Biochemistry doctorate from the University of Washington in Seattle, WA; and received her baccalaureate degree in Biochemistry and Cell Biology from the University of California, San Diego in La Jolla, CA.

Kari Fischer, PhD, is a Senior Program Manager for Life Sciences at the Academy, facilitating the planning and execution of both scientific symposia and programming for the general public. Her portfolio of programming spans biomedicine—from microsatellite DNA expansions to hearing restoration to cancer metabolism. Kari has also led several events on the interface between science and society, including a series of bioethics colloquia on randomized controlled trials, big data in healthcare, and conflict of interest; and several programs on science misinformation and science engagement with the public. Her contributions were featured at South by Southwest 2019 in the panel, "Preventing the Cambridge Analytica of Health Data." Her science writing has appeared in The Washington Post, The Scientist, and The New York Academy of Sciences Magazine. Dr. Fischer joined the Academy in 2016 after completing her PhD in Cell and Developmental Biology at Weill Cornell Medicine, where she studied breast cancer metastasis and the lung tumor microenvironment. For her work in lung cancer, she was awarded the Ruth L. Kirchstein National Research Service Award Individual Predoctoral Fellowship by the National Institutes of Health. She received the Julian R. Rachele Prize for Outstanding Graduate Student Research for her breast cancer metastasis study in Nature, an article with over 500 citations since its publication. Dr. Fischer’s undergraduate degree in Biochemistry and Molecular Biology is from the University of Massachusetts, Amherst.