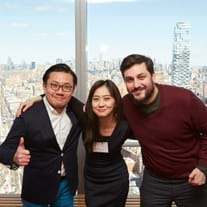 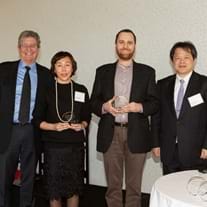 "International collaboration is critical in many fields. From infectious disease outbreaks to cancer treatment and drug development, we can accomplish much more when we reach out, shake hands, and collaborate."

What is the Interstellar Initiative?

The Interstellar Initiative is a program promoted by the Japan Agency for Medical Research and Development (AMED) and the New York Academy of Sciences. The initiative aims to increase international and interdisciplinary collaboration uniting scientists within the early stages of their careers and catalyzing scientific advancement. Early Career Investigators worldwide are invited to apply for a competitive application review process.

"In this stimulating environment, projects transformed, matured, and perfected right in front of our eyes. Everyone gained something from this eye-opening experience, including ideas, partnerships, and new collaborators."

What are the requirements for participating in the Interstellar Initiative?

All selected ECIs and mentors participate in two workshops over six months. Workshops are either virtual or in-person in New York City, and AMED covers travel expenses.

At the first workshop, the teams are introduced and learn about their teammates' expertise to identify complementary research areas to jointly formulate a concept. At the end of the workshop, teams present their ideas to the mentors and fellow ECIs for feedback. Funding is provided for expenses to work together between the two workshops. Teams are advised to interact with their mentors as needed.

At the second workshop, the teams fine-tune their proposals, continue to receive direction from their mentors, and present their updates to the group.

Following the second workshop, the teams are encouraged to submit their proposals for funding. Examples of agencies targeted by teams include the Human Frontier Science Program (HFSP), the National Research Foundation (NRF) Singapore, the Alzheimer's Association, the U.S. National Institutes of Health (NIH), the U.S. Department of Defense (DoD), and the Michael J. Fox Foundation, among others.

Why Apply for the Interstellar Initiative?

Scientists emerge from the Interstellar Initiative program with:

"If you're working in your own zone, you'll do what's familiar. But bringing together different disciplines and technologies creates a novel, creative environment for solving problems."

The Interstellar Initiative ― presented jointly by the Japan Agency for Medical Research and Development and the New York Academy of Sciences ― recognizes the world's most promising Early Career Investigators and connects them with peers to develop international, multi-disciplinary research projects addressing a major research question. The aim is to foster collaboration between disciplines and thereby catalyze unique discoveries.

The 2022-2023 Interstellar Initiative will address challenges in the area of Basic Research to elucidate the complex mechanisms of living organisms for the benefit of all humankind. Research topics may include biological functions at all levels of analysis: for example, studies on genes and individual molecules, intracellular networks, intercellular associations in tissues and organs, and networks underlying the complex functions of entire organisms.

Participation in this two-part workshop is by application only. Applications are invited from Early Career Investigators who have backgrounds in four broad categories: 1) Biomedical Sciences; 2) Life Sciences; 3) Physical/Natural Sciences, and 4) Biotechnology/Analytical technology. The deadline for application submission is May 24, 2022 (EDT).

Collaboration is key to truly innovative scientific discoveries and advancement. The Interstellar Initiative connects Early Career Scientists (ECIs) with peers, in related but distinct disciplines, under the guidance of Mentors who are established scientists at the forefront of their respective academic fields. This is a remarkable opportunity for investigators to: (i) receive expert guidance from leading senior scientists on the preparation of a compelling research proposal; (ii) network with exceptional researchers from around the world; and (iii) build international research collaborations.

Applications will be accepted from ECIs in the four broad disciplines above. ECIs accepted into the Interstellar Initiative will participate in a three-day virtual workshop at the New York Academy of Sciences* from September 12–14, 2022. They will be grouped into teams and asked to develop a research proposal with guidance from mentors. All teams will include one member from Japan.

Participants present the proposals developed within their teams at the workshop, and top teams will be recognized with a non-monetary award at the close of the event. All teams will receive a modest funding award from AMED through the Japanese team member's institution to further enhance their proposals, leading up to a second two-day virtual workshop on February 23–24, 2023. Proposals will be refined at this second workshop and prepared for submission to international funding agencies.

Please email interstellar@nyas.org with any questions.

The application portal will open on March 9, 2022. The application includes a request for a short proposal as outlined on the Eligibility and Guidelines page. In addition to applying to the portal, applicants in Japan should submit their application to the e-Rad portal (https://www.e-rad.go.jp/en/) as well.

Applications are invited from Early Career Investigators who have backgrounds in the following broad categories:

Note: Exceptions to these requirements may be made on a case-by-case basis at the discretion of the organizers. If you have questions about your eligibility, please contact interstellar@nyas.org.

*Extensions to this timeline will be made in certain cases, such as of pause for family leave.

Early Career Investigators must prepare a proposal that addresses the following:

Identify a critical research question in basic research, highlighting its importance and impact, and propose a research plan for how your expertise can address this question, including how you hope to improve this proposal through participation in the Interstellar Initiative.

Proposals may not exceed 1000 words in length, must be in English, and must address the evaluation criteria outlined below. A supplementary figure may be included but is not required. The proposal should also include a few sentences defining the methodology, why the proposal is unique or different from existing research, and what will be known once there is an answer from the experiments.

When mechanical engineer Carlotta Mummolo, PhD, neurobiologist Eleni Gourgou, PhD, and neuroscientist Teppei Matsui, PhD, teamed up in the Interstellar Initiative, their first task was finding common ground. “We have such diverse backgrounds that I initially joked we were speaking different languages,” Mummolo said in a group interview.

Mummolo, from the New Jersey Institute of Technology, is a roboticist who works with humans.  Matsui, from the University of Tokyo, uses rodents to study brain imaging. Gourgou, from the University of Michigan, studies roundworms. How could they possibly tap their diverse expertise to find a research question in healthy aging, the focus of the 2019/2020 Interstellar Initiative?

“We tried to find a common thread that allows us to use three different organisms as three different approaches to address the same target, Gourgou said. “That thread turned out to be locomotion and cognition.” Mummolo added, “this is the novelty of our project, because assessments of motor and cognitive performance are usually done separately. But we wanted to integrate them and look for a methodology that translates across species.”

The team said their research project was aided by mentors, who offered good advice to make their project as appealing as possible to grant reviewers. “One of our mentors told us something that I’ve kept in mind throughout this project,” Mummolo said. “She told us to focus on integration, innovation, and impact. That was very helpful.”

Matsui explained why he thought the global collaboration at the heart of the Interstellar Initiative was especially valuable for research in the life sciences. “Biology is becoming a ‘big science’ these days, and it is necessary to form a big team of experts to do cutting-edge science,” he said. “For small countries like Japan, it can be difficult to find experts within the country.”

Matsui also had a good final word in the discussion: “I’d encourage young scientists to apply for the Interstellar Initiative.”

When a radiation oncologist, an immunologist, and a mechanical engineer teamed up during the 2018/2019 Interstellar Initiative, they pulled themselves out of an early failure. “During preliminary experiments, we found that our initial proposal wouldn’t have worked,” said Michael Pacold, MD, PhD, of New York University. Taisuke Kondo, PhD, of Keio University, elaborated: “The therapy we were proposing was potentially very dangerous because of adverse effects for normal lung tissues.”

The pair, and Edmond Young, PhD, of the University of Toronto, were looking for a research project in the field of pancreatic cancer. As they collaborated virtually, after their first in-person workshop, they settled on an alternative approach. They would study metabolic features of the disease that make it insensitive to therapies that can be effective against other types of cancer.

“This new approach makes for a more focused grant,” said Young. “We’re answering a basic question that could have major impact across the board in basic science. The Interstellar Initiative has been very helpful. The first workshop was a meet-and-greet, shaking hands and getting to know one another. Six months later we have met again to parse out further details and receive mentored feedback.”

Pacold summed things up: “In science you have to be comfortable with the realization that you will be wrong. Often. Don’t be afraid of being wrong, look at what the data is telling you and adjust accordingly.”

When Japanese physicist Kumiko Hayashi of Tohoku University and neuroscientist Ephraim Trakhtenberg of the University of Connecticut met during the 2017 Interstellar Initiative, the synergies between their work were not immediately obvious. Through the Interstellar Initiative program, they discovered common ground that led to an exciting new research proposal. Hayashi and Trakhtenberg aimed to devise new strategies to restore neuronal function following injury. As human cells mature, their ability to replicate is severely reduced. This phenomenon is especially prevalent in the brain, where the creation of new neurons exists only at very low levels in adulthood. Trakhtenberg's work suggests that motor proteins may be involved in this loss. "If we can understand the dynamics of these proteins, we may be able to reverse the process," he said., During the past several years, Hayashi developed novel algorithms that can be applied to motor protein measurement and analysis. "I don't know much about neuroscience," she said, "but it turns out that my algorithms can illuminate some mechanisms of the brain." Using Hayashi's algorithm and Trakhtenberg's motor proteins expertise, the two hope to identify new therapeutic approaches that will help to increase the regeneration of neuronal function following injury.